Good Humor Has Basis in Truth... 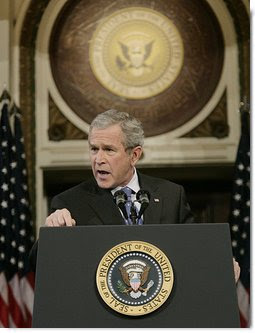 A funny conservative humor website called IMAO has some great material on a number of current topics. To end out the week on a lighter note, here is one of their installments on the White House response to critics of the current immigration bill winding its way through Congress. Be sure to visit IMAO if you are in the mood for some topical, political, or issue oriented humor.

This is part of their entry from a few days ago:

"Due to my numerous contacts, I've received the FAQ the White House is going to soon put out to answer people's concerns about the immigration bill. It was written with help from the editorial staff at the Wall Street Journal. Here it is:

Q. I'm concerned that the immigration bill focuses more on giving illegal immigrants amnesty than border protection. Does the President share these concerns?
A. The President doesn't hate brown people.

Q. This isn't a racial issue. Many people think this bill will only encourage more illegal immigration and leave our borders open and dangerous. What are the answer to these charges?
A. To answer your underlying question, I'm afraid the the President is against your proposal to commit genocide against Hispanics.

Q. This isn't about Hispanics! This is about our laws being respected and our national security!
A. Unfortunately, America has had a long history of closed-minded bigots like you who hate all immigrants and want to keep the nation white and pure. To answer what we can only assume will be your next question, no, jackboots aren't tax deductible, but have fun in your neo-Nazi march anyway."

There's more on their site but to understand the context for the above get a more serious take regarding the damaging way President Bush and his pro-immigration bill allies are responding to critics in their own camp in an article today by Peggy Noonan on WJS Opinion Journal entitled Too Bad.

Have good weekend!
Posted by Jack Miller at 10:26 AM