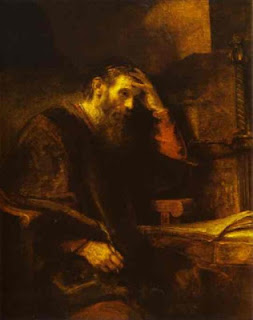 Following up on the last post, Wretched thoughts, here now are some self-abhorrent considerations:

Besides, there is no notion of sin and holiness whereof believers have a more sensible, spiritual experience; for although they may not or do not comprehend the metaphysical notion or nature of this pollution and defilement of sin, yet they are sensible of the effects it produceth in their minds and consciences. They find that in sin which is attended with shame and self-abhorrency, and requires deep abasement of soul. They discern in it, or in themselves on the account of it, an unsuitableness unto the holiness of God, and an unfitness thereon for communion with him...

... That the pollution of sin is that property of it whereby it is directly opposed unto the holiness of God, and which God expresseth his holiness to be contrary unto. Hence he is said to be “of purer eyes than to behold evil, or to look on iniquity,” Habbakuk 1:13. It is a thing vile and loathsome unto the eyes of his holiness, Psalm 5:4-6. So, speaking concerning it, he useth that pathetical dehortation, “Oh, do not this abominable thing that I hate,” Jeremiah 44:4. And with respect unto his own holiness it is that he sets it forth by the names of all things which are vile, filthy, loathsome, offensive, — everything that is abominable. It is so to him, as he is infinitely pure and holy in his own nature. And that consideration which ingenerates shame and self-abhorrency on the account of the defilement of sin is taken peculiarly from the holiness of God...

... But in all others, who have more light and spiritual sense, it produceth shame and self-abhorrency, which hath always a respect unto the holiness of God; as Job 42:5,6. They see that in sin which is so vile, base, and filthy, and which renders them so, that, like unto men under a loathsome disease, they are not able to bear the sight of their own sores, Psalm 38:5.God detesteth, abhorreth, and turneth from sin as a loathsomething, and man is filled with shame for it; it is, therefore, filthy. Yea, no tongue can express the sense which a believing soul hath of the uncleanness of sin with respect unto the holiness of God. And this may suffice to give a little prospect into the nature of this defilement of sin, which the Scripture so abundantly insisteth on, and which all believers are so sensible of...

... Our want of due answering unto the holiness of God, as represented in the law, and exemplified in our hearts originally, is a principal part and universal cause of our whole pollution and defilement by sin; for when our eyes are opened to discern it, this is that which in the first place filleth us with shame and self-abhorrency, and that which makes us so unacceptable, yea, so loathsome to God. Who is there who considereth aright the vanity, darkness, and ignorance of his mind, the perverseness and stubbornness of his will, with the disorder, irregularity, and distemper of his affections, with respect unto things spiritual and heavenly, who is not ashamed of, who doth not abhor himself? This is that which hath given our nature its leprosy, and defiled it throughout. And I shall crave leave to say, that he who hath no experience of spiritual shame and self-abhorrency, upon the account of this inconformity of his nature and the faculties of his soul unto the holiness of God, is a great stranger unto this whole work of sanctification...

... Something, indeed, of this kind will be wrought by the power of natural conscience, awakened and excited by ordinary outward means of conviction; for wherever there is a sense of guilt, there will be some kind of sense of filth, as fear and shame are inseparable. But this sense alone will never guide us to the blood of Christ for cleansing. Such a sight and conviction of it as may fill us with self-abhorrency and abasement, as may cause us to loathe ourselves for the abomination that is in it, is required of us; and this is the work of the Holy Ghost, belonging to that peculiar conviction of sin which is from him alone, John 16:8. I mean that self-abhorrency, shame, and confusion of face, with respect unto the filth of sin, which is so often mentioned in the Scripture as a gracious duty; as nothing is a higher aggravation of sin than for men to carry themselves with a carnal boldness with God and in his worship, whilst they are unpurged from their defilements. In a sense hereof the publican stood afar off, as one ashamed and destitute of any confidence for a nearer approach. So the holy men of old professed to God that they blushed, and were ashamed to lift up their faces unto him...

... Such was that in Adam, immediately after his fall; and such is that which God so frequently calls open and profligate sinners unto, — a shame accompanied with dread and terror, and from which the sinner hath no relief, unless in such sorry evasions as our first parents made use of. And, (2.) There is a shame which is evangelical, arising from a mixed apprehension of the vileness of sin and the riches of God’s grace in the pardon and purifying of it; for although this latter gives relief against all terrifying, discouraging effects of shame, yet it increaseth those which tend to genuine self-abasement and abhorrency. And this God still requires to abide in us, as that which tends to the advancement of his grace in our hearts. This is fully expressed by the prophet Ezekiel, chapter 16:60- 63,


“I will remember my covenant with thee in the days of thy youth, and I will establish unto thee an everlasting covenant. Then thou shalt remember thy ways, and be ashamed. And I will establish my covenant with thee; and thou shalt know that I am the LORD: that thou mayest remember, and be confounded, and never open thy mouth any more because of thy shame, when I am pacified toward thee for all that thou hast done, saith the Lord GOD.”