In justification the righteousness of Christ's death and obedience are accounted, credited, or imputed to sinners by faith alone, not infused or worked inherently into them.

Heidelberg Catechism 60
Although my conscience accuses me that I have grievously sinned against all God's commandments, have never kept any of them, and am still inclined to all evil, yet God, without any merit of my own, out of mere grace, imputes to me the perfect satisfaction, righteousness, and holiness of Christ. He grants these to me as if I had never had nor committed any sin, and as if I myself had accomplished all the obedience which Christ has rendered for me, if only I accept this gift with a believing heart.

Belgic Confession 22
Jesus Christ, imputing to us all his merits and so many holy works which he has done for us, and in our stead, is our Righteousness.

Westminster Confession of Faith 11.1
Those whom God effectually calls, He also freely justifies; not by infusing righteousness into them, but by pardoning their sins, and by accounting and accepting their persons as righteous; not for any thing wrought in them, or done by them, but for Christ's sake alone; nor by imputing faith itself, the act of believing, or any other evangelical obedience to them, as their righteousness; but by imputing the obedience and satisfaction of Christ unto them.

Westminster Larger Catechism 71
Although Christ, by his obedience and death, did make a proper, real, and full satisfaction to God's justice in the behalf of them that are justified; yet inasmuch as God accepts the satisfaction from a surety, which he might have demanded of them, and did provide this surety, his own only Son, imputing his righteousness to them, and requiring nothing of them for their justification but faith, which also is his gift, their justification is to them of free grace.

Westminster Shorter Catechism 33
Justification is an act of God's free grace, wherein he pardons all our sins, and accepts us as righteous in his sight, only for the righteousness of Christ imputed to us, and received by faith alone.
Posted by Jack Miller at 5:43 PM No comments:

"Most know William Tyndale (1484-1536) as one of the most important figures in translating the Scriptures for the English-speaking world. But rarely discussed are his deep, pastoral concerns 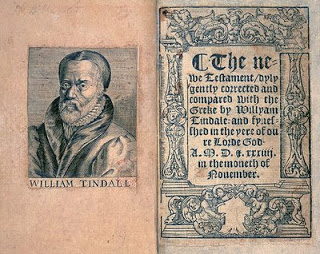 that all who read those Scriptures must understand the distinction between the law and the gospel. In fact, Tyndale saw this as so crucial that he wrote a lengthy Prologue for his new translation that focused on unpacking the importance of this distinction. Knowing that many of his readers would be handling the Scriptures themselves for the first time, Tyndale's Prologue is an impassioned plea for them to understand the roles of the law and the gospel before they read the Bible so that they will divide it rightly from the very beginning. As he says at the outset:"


Nevertheless, seeing that it hath pleased God to send unto our Englishmen...the scripture in their mother tongue, considering that there be in every place false teachers and blind leaders; that ye should be deceived of no man, I supposed it very necessary to prepare this Pathway into the scripture for you, that ye might walk surely, and ever know the true from the false: and, above all, to put you in remembrance of certain points, which are, that ye well understand what these words mean; the Old Testament; the New Testament; the law, the gospel; Moses, Christ; nature, grace; working and believing; deeds and faith; lest we ascribe to the one that which belongeth to the other, and make of Christ Moses; of the gospel, the law; despise grace, and rob faith.

Excerpted from Modern Reformation
Posted by Jack Miller at 7:27 AM No comments: