John Piper writes concerning how one is made right with God in the forward to a new book by Thomas Schreiner. Now this excerpt may just be the result of a poorly expressed thought concerning justification and salvation. But it is worrisome. Does he understand what the words faith alone mean? 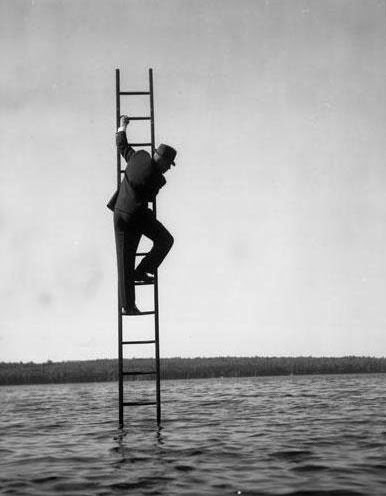 Such faith always “works by love” and produces the “obedience of faith.” And that obedience— imperfect as it is till the day we die—is not the “basis of justification, but... a necessary evidence and fruit of justification.” In this sense, love and obedience—inherent righteousness—is “required of believers, but not for justification”—that is, required for heaven, not for entering a right-standing with God.

J. Gresham Machen responded emphatically to Piper 92 years ago in Christianity and Liberalism:


If Christ provides only a part of our salvation, leaving us to provide the rest, then we are still hopeless under the load of sin. For no matter how small the gap which must be bridged before salvation can be attained, the awakened conscience sees clearly that our wretched attempt at goodness is insufficient even to bridge that gap. The guilty soul enters again into the hopeless reckoning with God, to determine whether we have really done our part. And thus we groan again under the old bondage of the law. Such an attempt to piece out the work of Christ by our own merit, Paul saw clearly, is the very essence of unbelief; Christ will do everything or nothing, and the only hope is to throw ourselves unreservedly on His mercy and trust Him for all.

And over 450 years ago John Calvin weighed in with his more comprehensive rebuttal in his commentary on Ephesians 2:8-10: For by grace you have been saved through faith. And this is not your own doing; it is the gift of God, not a result of works, so that no one may boast. For we are his workmanship,created in Christ Jesus for good works, which God prepared beforehand, that we should walk in them.

For by grace are ye saved... This is an inference from the former statements. Having treated of election and of effectual calling, he arrives at this general conclusion, that they had obtained salvation by faith alone. First, he asserts, that the salvation of the Ephesians was entirely the work, the gracious work of God. But then they had obtained this grace by faith. On one side, we must look at God; and, on the other, at man. God declares, that he owes us nothing; so that salvation is not a reward or recompense, but unmixed grace. The next question is, in what way do men receive that salvation which is offered to them by the hand of God? The answer is, by faith; and hence he concludes that nothing connected with it is our own. If, on the part of God, it is grace alone, and if we bring nothing but faith, which strips us of all commendation, it follows that salvation does not come from us...

What remains now for free-will, if all the good works which proceed from us are acknowledged to have been the gifts of the Spirit of God? Let godly readers weigh carefully the apostle's words. He does not say that we are assisted by God. He does not say that the will is prepared, and is then left to run by its own strength. He does not say that the power of choosing aright is bestowed upon us, and that we are afterwards left to make our own choice. Such is the idle talk in which those persons who do their utmost to undervalue the grace of God are accustomed to indulge. But the apostle affirms that we are God's work, and that everything good in us is his creation; by which he means that the whole man is formed by his hand to be good. It is not the mere power of choosing aright, or some indescribable kind of preparation, or even assistance, but the right will itself, which is his workmanship; otherwise Paul's argument would have no force. He means to prove that man does not in any way procure salvation for himself, but obtains it as a free gift from God. The proof is, that man is nothing but by divine grace. Whoever, then, makes the very smallest claim for man, apart from the grace of God, allows him, to that extent, ability to procure salvation.

Could these be Antinomian musings or are Machen's and Calvin's words fairly understood to be the Gospel proper - the power of salvation unto everyone who believes - in Christ alone?

Update:  John Calvin just called this in from his Institutes of Christian Religion. He felt the need to add an exclamation point to his previous words:


When we see that the whole sum of our salvation, and every single part of it, are comprehended in Christ, we must beware of deriving even the minutes portion of it from any other quarter...

Hence the Scriptures make the sum of our salvation to consist in the removal of all enmity, and our admission into favor; thus intimating, that when God is reconciled all danger is past, and every thing good will befall us. Wherefore, faith apprehending the love of God has the promise both of the present and the future life, and ample security for all blessings, (Ephesians 2:14.)