Jayber Crow and the Gospel...

On page 321 of Jayber Crow by Wendell Berry, Jayber opines:


I am, maybe, the ultimate Protestant, the man at the end of the Protestant road, for as I have read the Gospels over the years, the belief has grown in me that Christ did not come to found an organized religion but came instead to found an unorganized one.  He seems to have come to carry religion out of the temples into the fields and sheep pastures, onto the roadsides and the banks of rivers, into the houses of sinners and publicans, into the town and the wilderness, toward the membership of all that is here.  Well, you can read and see what you think. 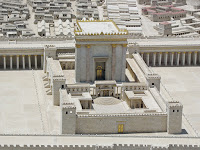 This got me to thinking (uh oh!).  Jesus Christ came into the world and, as Jayber said, carried religion into the houses of publicans and sinners.  Jesus didn't hole up in the temple and require those in need of a physician to make the trek to him.  As the Charles Wesley hymn says,


He left his Father's throne above (so free, so infinite his grace!), emptied himself of all but love, and bled for Adam's helpless race.

And an amazing thing happened on that day when Jesus died on the cross.  As Matthew 27: 50-51 puts it:


And Jesus cried again with a loud voice, and yielded up his spirit.  And behold, the veil of the temple was rent in two from the top to the bottom; and the earth did quake...

"The veil of the temple was rent in two."  The barrier between holy God and sinful man had been removed.  The immeasurable chasm had been bridged.  Something new had indeed been accomplished which could be termed a new religion.  And this new religion was the fulfillment of the old religion, and yet it was different.  How so?  The tearing of the veil opened the way, the access to God, by the shed blood of Jesus.  The old religion called sinners to the temple in order to obtain forgiveness and acceptance through required and specific blood sacrifices.  The new religion went forth out of the temple, through the rent veil, into the world in the power of Christ crucified.  Christ would still go out among the sinners and publicans, into the towns and wilderness where people live, yet not in his human form but via his Spirit-empowered message.

Christianity, at its core, is a religion that goes forth and declares a message of good news to sinners.  It's the message that changes everything (the earth did quake) for the guilty and the condemned, for the heavy burdened and the bruised reeds.  Rather than a religion of God's legal and moral requirements that man must approach and satisfy, it is God coming to those who have fallen short of those very requirements (and continue to do so on a daily basis) with the free offer of his gracious salvation through Christ's satisfaction.  It is a religion meant to go forth continually in our churches as the declarative refrain of pardon, mercy, and righteousness in Christ to the sinner, believer and non-believer.  It's the intended message of the preached Word and the Lord's Supper - to be heard, received, and trusted in by his followers, for it is the power of God unto salvation to every one that believeth; to the Jew first, and also to the Greek (Rom. 1:16).  It is the faith-building gospel message that strengthens wearied believers as they continue to battle the world, the flesh, and the devil:

Having therefore, brethren, boldness to enter into the holy place by the blood of Jesus,
by the way which he dedicated for us, a new and living way, through the veil, that is to say, his flesh; and having a great priest over the house of God;
let us draw near with a true heart in fulness of faith, having our hearts sprinkled from an evil conscience: and having our body washed with pure water,
let us hold fast the confession of our hope that it waver not; for he is faithful that promised:
and let us consider one another to provoke unto love and good works; (Heb. 10:19-23)

I'd like to think that Jayber would agree, but you'll have to ask him...

Posted by Jack Miller at 4:23 PM No comments: