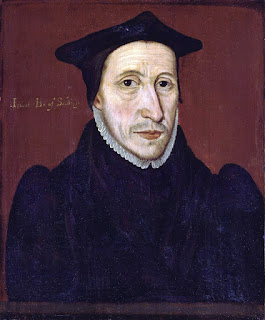 A question that hangs out there in Anglican circles is as follows: Is the church born of the gospel, i.e. the Word of God rightly preached, and thus legitimized by sound apostolic doctrine or is a true church established through the official/physical succession of bishops? It is one or the other. It can't be both. The one option raises right doctrine as taught in Scripture as the primary and necessary mark of a true church. The other puts forth the continuation of a physical lineage of ministerial successors from the Apostles as the esse of the church.

John Jewell was a disciple of Peter Martyr Vermigli. He was also a Marian exile and later Bishop of Salisbury, the author of The Apology of the Church of England, as well as the chief author of the Homilies Book II. Richard Hooker spoke of him as the "worthiest divine that Christendom hath bred for some hundreds of years." In his Apology Jewell touches upon the above question. But it remained to be more directly addressed in his Reply Unto M. Hardings Answer. Finally in his Homily for Whit-Sunday, Jewell states the confessional position of the Church of England regarding the marks of a true church. Needless to say, while Jewell clearly embraced episcopal polity and proper ordination of clergy, he steered clear of any strict interpretation of apostolic authority residing in bishops or presbyters due to physical succession (via laying on of hands) from the Apostles on down. Rather, he argues and teaches that what ensures the validity of the visible church before God is the retention and communication of sound Apostolic teaching, the faith once delivered.

Some excerpts from Jewell's Reply:
"To be Peter's lawful successor, it is not sufficient to leap into Peter's stall. Lawful succession standeth not only in possession of place, but also, and much rather, in doctrine and diligence. Yet the bishops of Rome, as if there were nothing else required, evermore put us in mind and tell us many gay tales of their succession." [pg. 201]
"... But Christ's love passeth not by inheritance of succession of sees." [pg. 283]
"... But Christ saith: By order of succession, the scribes and Pharisees sit in Moses chair..." [pg. 322]
"... This is M. Harding's holy succession - Though faith fall, yet succession must hold; for unto succession God hath bound the Holy Ghost." [pg. 347]
"... Now, M. Harding, if the pope and his Roman clergy, by his own friends confession, be fallen from God's grace, and departed from Christ to antichrist, what a miserable claim is it for them to hold only to bare succession! It is not sufficient to claim succession of place: it behooveth us rather to have regard to the succession of doctrine. St. Benard saith: What availeth it, if they be chosen in order, and live out of order." [pg. 349]
"... The faith of Christ, M. Harding, goeth not always by succession. The bishops of Rome have been Arians, Nestorians..." [pg.610]
"And for that cause they say, We are Peter's successors: even as the Pharisees sometime said, We be the children of Abraham. But John said unto them, Put not your affiance in such succession. For God is able even of these stones to raise up children unto Abraham." [pg. 439]

Now the above quotes aren't intended as any kind of definitive case by Jewell. But his deemphasis and outright dismissal of physical succession as that which validates the ministry is evident. Likewise, he elevates sound doctrine as the key trait of a true minister of God. Finally in his Homily for Whit-Sunday, Jewell, in defining a true church and noting the marks which do validate such a church, avoids any mention of so-called Apostolic Succession. Instead he writes:

"The true church is a universal congregation or fellowship of GOD's faithful and elect people, built upon the foundation of the Apostles and Prophets, Jesus Christ himself being the head corner stone (Eph. 2:20). And it hath always three notes or marks whereby it is known. Pure and sound doctrine, the Sacraments ministered to Christ's holy institution, and the right use of Ecclesiastical discipline. This description of the Church is agreeable both to the Scriptures of God, and also to the doctrine of the ancient fathers, so that none may justly find fault therewith."
Posted by Jack Miller at 4:09 PM 2 comments: