John McCain not letting up...

... weighing in on the MoveOn.org ad:

Posted by Jack Miller at 2:43 PM No comments:

Rudy on Hillary on Petraeus...

Rudy, hard hitting and on the money:

Posted by Jack Miller at 1:50 PM No comments: 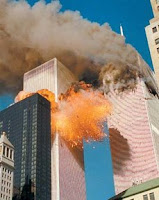 Desperation (or just who they are?) on the Left leading to an even more despicable slander. And this about the general that the Senate unanimously voted earlier this year as the top commander in Iraq:

From the Corner over at National Review Online:

Don't Question His Patriotism! [Cliff May]

MoveOn.org, it seems, is questioning the patriotism of Gen. David Petraeus, the top U.S. military commander in Iraq. Tomorrow, the anti-war group is running a full-page advertisement in the New York Times under the headline: "General Petraeus or General Betray us?"

So they are implying that Petraeus has betrayed the country — that he is a traitor. And what is the nature of the betrayal? That he refuses to accept defeat at the hands of al-Qaeda and Iranian-backed militias in Iraq.

Pete Hegseth of Veterans for Freedom wants to know who in Congress and which candidates for president stand with MoveOn — and which believe that such slander of America's military during wartime is beyond the pale and must be denounced in the strongest terms.

Article HERE from the Weekly Standard.

Don't look for anyone in the Democrat leadership in Congress to denounce MoveOn.org. They are more afraid of offending this activist group of the Democrat Party than offending General Petraeus and the troops laying their lives on the line. And don't look for gasps of horror from the MSM.

Is accusing the General of being a traitor akin to questioning his patriotism? I thought Democrats considered that to be the worst thing... well you know what I am saying.
Posted by Jack Miller at 8:07 PM No comments: