Calvin and the Church of England

To continue the topic addressed at The World's Ruined concerning the reformed nature of the English Reformation, here is an excerpt from a Gerald Bray essay commemorating the 500th anniversary of John Calvin's birth - making the same case, only better! 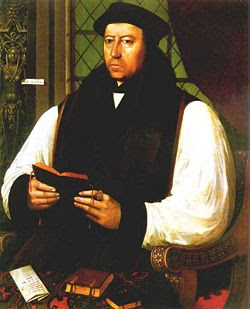 The precise shape of that Protestantism [in England] however owes more to John Calvin than it does to Henry VIII, who never really broke with the traditional Catholicism of his youth. Calvin never visited England, but he corresponded with people there and welcomed British exiles in Geneva during the reactionary reign of Mary Tudor. It was in Geneva, under his auspices, that the best and most influential early English translation of the Bible appeared (in 1560) and relations between the Swiss city and the British Isles would remain close long after his death.

Calvin’s mentor, Martin Bucer, fled to England in 1548, and although he died there within a year, he made an impact on English theology and worship that can still be detected in the Book of Common Prayer. The Thirty-nine Articles of Religion follow the outline of Calvin’s Institutes to a surprising extent, and their content is similar. It is no exaggeration to say that the theologians who shaped Anglican identity in the Elizabethan era were deeply indebted to Calvin, whose major works were quickly translated into English to become the staple diet of the new-style ordinands being turned out by the universities during those years. Not everyone was equally enthralled by this, of course, but opposition was muted and divided. Anglo-Catholic apologists have tried to find a coherent anti-Calvinistic Anglicanism which they attribute to such figures as Richard Hooker and Lancelot Andrewes, but modern non-partisan research has generally shown that their claims cannot be sustained. They are based on the widespread but false assumption that Calvinism and Puritanism are essentially the same thing and that both go back to Calvin himself. In reality, conformist opinion in England was just as imbued with Calvin’s mindset as any Puritan was. This can be seen from the career of Archbishop John Whitgift (1583-1604), whose theology was as Calvinist as anyone in Geneva could have hoped for but who was implacably opposed to Puritanism. It was not until the reign of Charles I (1625-49) that a small group of anti-Calvinists was able to influence the development of the
Church of England, largely thanks to the king’s patronage, but the end result of that was civil war and the overthrow of the high church party, which was seen by most people as an aberrant blemish on the doctrinal purity of the national church, a purity which they identified with the teachings of Calvin.

But although that is undoubtedly true, it must be said that Calvin’s reputation among Anglicans today is not high. Presbyterians and other Reformed Protestants continue to honour him as a foundational theologian comparable to Martin Luther, but while modern Anglicans are often ready to embrace Luther, they generally turn their backs on Calvin and think of him as somehow alien to their own outlook...

Who is Gerald Bray?
Posted by Jack Miller at 3:43 PM