John Calvin: If You Keep My commandments, You will abide in My Love...

John Calvin unpacks the intersection between our obedience to Christ’s commands and God’s love for us in Christ:

If you keep my commandments, you will abide in my love, just as I have kept my

Father's commandments and abide in his love. - John 15:10

For these two things are continually united, that faith which perceives the undeserved love of Christ toward us, and a good conscience and newness of life. And, indeed, Christ does not reconcile believers to the Father, that they may indulge in wickedness without reserve, and without punishment; but that, governing them by his Spirit, he may keep them under the authority and dominion of his Father. Hence it follows, that the love of Christ is rejected by those who do not prove, by true obedience, that they are his disciples.

If any one object that, in that case, the security of our salvation depends on ourselves, I reply, it is wrong to give such a meaning to Christ's words; for the obedience which believers render to him is not the cause why he continues his love toward us, but is rather the effect of his love. For whence comes it that they answer to their calling, but because they are led by the Spirit of adoption of free grace?

But again, it may be thought that the condition imposed on us is too difficult, that we should keep the commandments of Christ, which contain the absolute perfection of righteousness, -- a perfection which   far exceeds our capacity, -- for hence it follows, that the love of Christ will be useless, if we be not endued with angelical purity. The answer is easy; for when Christ speaks of the desire of living a good and holy life, he does not exclude what is the chief article in his doctrine, namely, that which alludes to righteousness being freely imputed, in consequence of which, through a free pardon, our duties are acceptable to God, which in themselves deserved to be rejected as imperfect and unholy. Believers, therefore, are reckoned as keeping the commandments of Christ when they apply their earnest attention to them, though they be far distant from the object at which they aim; for they are delivered from that rigorous sentence of the law,

“Cursed be he that hath not confirmed all the words of this law to do them.”   (Deuteronomy 27:26)

John Calvin’s Commentary on the Gospel of John

Here are some related posts:

Christ's Active Obedience: The End of the Law Unto Righteousness To Everyone That Believes - https://theworldsruined.blogspot.com/2014/10/christs-active-obedience-end-of-law.html

Musings on Gratitude and Obedience - https://theworldsruined.blogspot.com/2014/12/musings-on-gratitude-and-obedience.html

And by this we know that we have come to know him, if we keep his
commandments. (1 John 2:3) 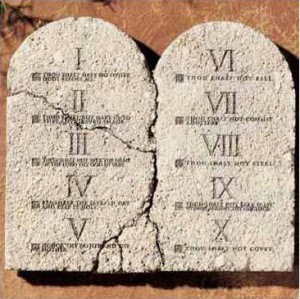 But there is no one who in everything keeps them; there would thus be no knowledge of God in the world. To this I answer, that the Apostle is by no means inconsistent with himself. Since he has before shewed that all are guilty before God, he does not understand that those who keep his commandments wholly satisfy the law (no such example can be found in the world); but that they are such as strive, according to the capacity of human infirmity, to form their life in conformity to the will of God. For whenever Scripture speaks of the righteousness of the faithful, it does not exclude the remission of sins, but on the contrary, begins with it.
But we are not hence to conclude that faith rests on works; for though every one receives a testimony to his faith from his works, yet it does not follow that it is founded on them, since they are added as an evidence. Then the certainty of faith depends on the grace of Christ alone; but piety and holiness of life distinguish true faith from that knowledge of God which is fictitious and dead; for the truth is, that those who are in Christ, as Paul says, have put off the old man. (Colossians 3:9.)
John Calvin’s Commentary of 1 John
Emphasis added
Posted by Jack Miller at 10:33 AM No comments: