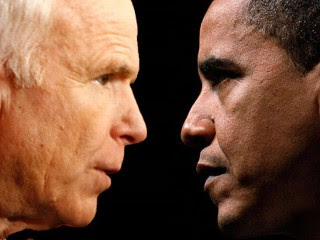 Rasmussen has Obama up by 3 points. But as you get into the internals of the poll it really looks even tighter:

Among those who “always” vote in general elections, Obama leads by just a single point.

As for those who have not yet voted but are “certain” they will do so, the race is tied at 48%. Two percent (2%) of these “certain” voters plan to vote for a third party option while 2% say they are undecided.

It is still an uphill battle for McCain/Palin and, with less than a week, unlikely that they'll squeeze out a victory. But it is getting interesting.

So I have gone from... "it's over" to "it ain't over till it's over" to now... "wouldn't it be sweet if John and Sarah pull out a last minute victory over the one."

If Obama were to lose, the shock and outrage on the left and in the MSM (sorry to be redundant) would register off the Richter scale... that would be something to behold.
Posted by Jack Miller at 11:22 AM