A few of John Calvin's thoughts on the doctrine of election as found in the Institutes of Religion: 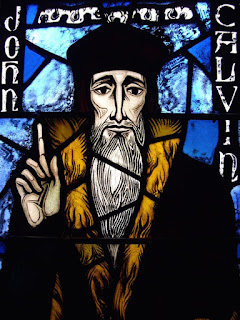 "In regard to the elect, we regard calling as the evidence of election, and justification as another symbol of its manifestation, until it is fully accomplished by the attainment of glory."

"If the end of election is holiness of life, it ought to arouse and stimulate us strenuously to aspire to it, instead of serving as a pretext for sloth."

"Those, therefore, whom God has chosen he adopts as sons, while he becomes to them a Father. By calling, moreover, he admits them to his family, and unites them to himself, that they may be one with him. When calling is thus added to election, the Scripture plainly intimates that nothing is to be looked for in it but the free mercy of God."

"Then what is the end of election, but just that, being adopted as sons by the heavenly Father, we may by his favor obtain salvation and immortality? How much soever you may speculate and discuss you will perceive that in its ultimate object it goes no farther. Hence, those whom God has adopted as sons, he is said to have elected, not in themselves, but in Christ Jesus, (Ephesians 1:4;) because he could love them only in him, and only as being previously made partakers with him, honor them with the inheritance of his kingdom. But if we are elected in him, we cannot find the certainty of our election in ourselves; and not even in God the Father, if we look at him apart from the Son. Christ, then, is the mirror in which we ought, and in which, without deception, we may contemplate our election. For since it is into his body that the Father has decreed to engraft those whom from eternity he wished to be his, that he may regard as sons all whom he acknowledges to be his members, if we are in communion with Christ, we have proof sufficiently clear and strong that we are written in the Book of Life."