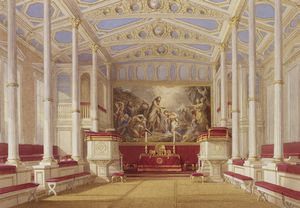 It's not that the reformation in England didn't resume under Queen Elizabeth.  The question seems to be what was the nature of that reformation.  Whereas religion under King Edward was moving into closer identification with that of the continental reform churches, after Mary and under Elizabeth there was a stepping back.  This wasn't so much a reversal as a change of course.  The doctrines of the gospel had again been fully embraced after 1558, but the nature of the Church in its worship had become frozen in a 1549/1552 time frame.  And this was no mere chance of fate, but rather the direction Elizabeth chose.  According to historian Diarmaid MacColluch, ... the plain fact was that the Supreme Governor would not allow the Edwardian Reformation to proceed on its path, at least if it meant structural change to her Church (Cranmer's Ambiguous Legacy).

As documented in Parts 1, 2 & 3, frustration with the pace and even the direction of reform is clearly seen in the letters of John Jewell.  Having returned from Zurich and soon appointed bishop of Salisbury (1559), he became the chief apologist of the reformation in England.  His must have been a difficult path, for all was not well within this second reformation.  Indeed, at Anglican Prayerbook Churchmanship, our friend Hudson Barton conjectures about that frustration and the subsequent unfolding of events with the rise of Puritanism in Elizabeth's England:


... the returning [Marian] exiles expected Elizabeth to receive the Reformation not as her father had established it but as it had subsequently evolved [under Edward]. When she didn't, the reactionary movement of Puritanism was born.

One such moment that may have contributed to that course of events is found in one of John Jewell's letters quoted in Part 3, where he mentions "that little crucifix" of Queen Elizabeth's. That crucifix was in Elizabeth's private chapel and became the subject of an official disputation in 1560.  Interestingly, the two selected to defend the use of the crucifix were the moderate reformer and Marian exile Richard Cox (an interesting choice as he later refused to preach in her chapel because of the crucifix) and Archbishop of Canterbury Matthew Parker.  Parker, had managed to stay in England under the Catholic Queen Mary, a fact that aggravated some of the more ardent Protestants. I don't hold that as something that should necessarily call in question his commitment to reform, but nonetheless I do find it interesting path to pursue.  The two individuals who were selected to make the case against the crucifix were the Marian exile reformers Edmund Grindal and John Jewell.  Below is a lengthy quote from a letter that Jewell wrote to Peter Vermigli on February 5, 1560 which highlights the tension of that moment:


This controversy about the crucifix is now at its height.  You would scarcely believe to what a degree of insanity some persons, who once had some shew of common sense, have carried upon so foolish a subject.  There is not one of them, however, with you you are acquainted, excepting Cox.  A disputation upon this subject will take place to-morrow.  The moderators will be persons selected by the council.  The disputants on the one side are the archbishop of Canterbury, and Cox; and on the other, Grindal the bishop of London, and myself.  The decision rests with the judges.  I smile, however, when I think with what grave and solid reasons they will defend their little cross.  Whatever be the result, I will write to you more at length when the disputation is over; for the controversy is as yet undecided; yet, as far as I can conjecture, I shall not again write to you as a bishop.  For matters are come to that pass, that either the crosses of silver and tin, which we have everywhere broken in pieces, must be restore, or our bishopricks be relinquished.

Although the outward vestiges of Roman Catholic worship were, by and large, eradicated throughout the realm during the years that followed, it was not so where Elizabeth worshipped; yet another piece of evidence that leads one to question the Supreme Governor's level of commitment to Protestant reform.  And one wonders what her example communicated to those clergy in the Church who were less than enthralled with further reform according to the standard of Scripture:


Although Elizabeth's actual beliefs elude us, we are able to get an indication of them from her attitudes and gestures. Her chapels were conservative - the crucifix was displayed, and she also liked candles and music. She disliked long Protestant sermons, but also expressed displeasure at some Catholic rituals such as the elevation of the host, which implied that she rejected the Catholic belief of transubstantiation. She also did not really approve of the clergy marrying as she expressed on several occasions, but as this was an integral aspect of Protestantism, she had to accept it.

Clearly Elizabeth was a mixed bag.

The above take is consistent with MacColluch's assessment - that Elizabeth's 1559 Settlement... began the Church of England's long march away from Cranmer's eucharistic theology - and I would also add that it indicated a preference, or at least a tolerance, for retaining some remnants of the Roman religion.

[Update: Additional thoughts below from our friend Hudson Barton of Anglicans in the Wilderness, 12/18/2012] -

"The year before the "little cross" incident (1559), Jewell, believing that he was defending a clearly defined Protestant Church of England, had challenged the Romanists at St. Paul's Cross to prove their case from Scripture. By 1560, in Jewell's letter to Vermigli, it appears that he expected his involvement with the disputation over the "little cross" would result in a victory for either the Reformation or the Romanists. In that he was willing at this point in his life to lose his bishoprick for the cause of the Reformation, it appears that he was not willing to say "my Queen for better or worse". He had seen the enemy within ("that little cross"), and appeared ready to defend the Church against that enemy, to see it removed at any cost. But history went in an unexpected direction. The little cross was not removed but only hidden away, and Jewell kept his bishoprick.

"The genius of Elizabeth was that she was able to turn the argument of the "little cross" on its head, convincing Reformers like Jewell that the purity of the Church was not compromised by so small a matter. I believe this was the advice of Whitgift and Parker, to settle with the Queen, to close their eyes and continue about the Church business as if the problem didn't exist. Two years later, in 1562, Jewell published his "Apologia ecclesiae Anglicanae", and sure enough the "little cross" had been forgotten. Jewell's Apology became the official defense of the CofE because the establishment knew that it was not a defense of a set of principles, but rather of an institution.

"I am reminded of the Danish fairy tale of "The Princess and the Pea", how a real princess will detect the smallest abnormality in her realm and never rest until it is removed."
Posted by Jack Miller at 7:28 PM