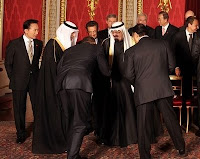 I have been mulling over the question of whether Barack Obama is our first "post-American" president. By that I mean he may be the first person to occupy the Oval Office who seems more comfortable as a "world citizen" than as an American; who tends to reflexively see U.S. history mainly in terms of injustices perpetrated by America on various groups or nations rather than mainly a record of freedom and good. Any way, you get the idea. Here are several items that would lend support to that thesis:

1. His compulsive ongoing apology tour of the world, in which he panders to Muslim countries, ignores enemy threats such as Iran and North Korea, casts the U.S. use of the atom bomb to end WWII as an atrocity, equates Guantanamo which holds illegal combatants (as defined by the Geneva Convention) during wartime with the political prisoners of various totalitarian regimes around the world, bows to Saudi King Abdullah, reaches out to our enemies (Chavez, Iran, Hezzbulah, Hamas) while disrespecting longtime allies (Israel, England).

2. His nonchalant violation of the property rights of investors in GM and Chrysler, breaking legal contracts protected under the Constitution, and taking federal government ownership control of those two companies... all of which show a disregard for the rule of law and constitutionalism, the bedrock of our civil society.

3. His longtime close association with mentors (William Ayers, Jeremiah Wright) who, for years, have openly expressed hatred for America.

4. The ease with which he portrays America as a country that "tortures", that "imposes its values" on other countries, is "justly" opposed by our enemies due to our past actions.