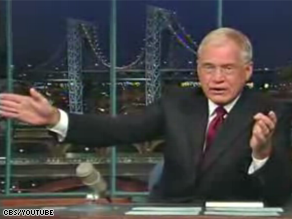 Here's the LINK to the article. Below is his second explanation. You be the judge.


“All right, here – I’ve been thinking about this situation with Governor Palin and her family now for about a week – it was a week ago tonight, and maybe you know about it, maybe you don’t know about it. But there was a joke that I told, and I thought I was telling it about the older daughter being at Yankee Stadium. And it was kind of a coarse joke. There’s no getting around it, but I never thought it was anybody other than the older daughter, and before the show, I checked to make sure in fact that she is of legal age, 18. Yeah. But the joke really, in and of itself, can’t be defended. The next day, people are outraged. They’re angry at me because they said, ‘How could you make a lousy joke like that about the 14-year-old girl who was at the ball game?’ And I had, honestly, no idea that the 14-year-old girl, I had no idea that anybody was at the ball game except the governor and I was told at the time she was there with Rudy Giuliani … and I really should have made the joke about Rudy …” (audience applauds) “But I didn’t, and now people are getting angry and they’re saying, ‘Well, how can you say something like that about a 14-year-old girl, and does that make you feel good to make those horrible jokes about a kid who’s completely innocent, minding her own business,’ and, turns out, she was at the ball game. I had no idea she was there. So she’s now at the ball game, and people think that I made the joke about her. And, but still, I’m wondering, ‘Well, what can I do to help people understand that I would never make a joke like this?’ I’ve never made jokes like this as long as we’ve been on the air, 30 long years, and you can’t really be doing jokes like that. And I understand, of course, why people are upset. I would be upset myself.

“And then I was watching the Jim Lehrer ‘Newshour’ – this commentator, the columnist Mark Shields, was talking about how I had made this indefensible joke about the 14-year-old girl, and I thought, ‘Oh, boy, now I’m beginning to understand what the problem is here. It’s the perception rather than the intent.’ It doesn’t make any difference what my intent was, it’s the perception. And, as they say about jokes, if you have to explain the joke, it’s not a very good joke. And I’m certainly – ” (audience applause) “– thank you. Well, my responsibility – I take full blame for that. I told a bad joke. I told a joke that was beyond flawed, and my intent is completely meaningless compared to the perception. And since it was a joke I told, I feel that I need to do the right thing here and apologize for having told that joke. It’s not your fault that it was misunderstood, it’s my fault. That it was misunderstood.” (audience applauds) “Thank you. So I would like to apologize, especially to the two daughters involved, Bristol and Willow, and also to the governor and her family and everybody else who was outraged by the joke. I’m sorry about it and I’ll try to do better in the future. Thank you very much.” (audience applause).


To me, this is just Letterman essentially saying, "My intent was OK (I was joking about Bristol), but because it was a flawed, poorly constructed (kind of coarse?) joke people heard it as aimed at Willow. My bad for the misunderstanding." He starts to go in the direction of what was objectionable when he says that the "joke, in and of itself, can't be defended." But after that he is off into a longer rationalization that at the core this was a Bristol - Willow confusion thing. This is not much more than a wordy explanation that repeats what he said in his first attempt to put out the fire. He does offer a direct apology of sorts to the Palin's and their two daughters. But unfortunately that is completely undercut by his obfuscation of what was offensive (the problem as he says), which was NOT to whom the joke was directed nor the perception of it, but the actual vile nature and content of the so-called joke... period, end of discussion!

Maybe Dave needs to go on an apology tour like Obama.

[Update] Governor Palin accepts Letterman's apology which is, at this point, the gracious thing to do. She knows it's time to move on.

Original post on his joke... Diddling Dave, Don Imus, And The Media

Follow up after the Letterman's first attempt to quell the growing anger and outrage... Letterman Joke Update: Man or Worm?
Posted by Jack Miller at 8:44 PM