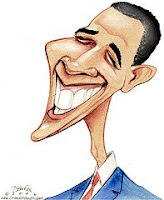 Abe Greenwald, in a post at Commentary (Don’t Think They’re Not Keeping Score, Mr. President) draws attention to what has become an Obama obsession and a real security concern for the U.S.

Greenwald's key point:
We’re in uncharted territory. Never - the Carter years included - has an American administration been so deliberate and thorough in spreading the word of an America with its guard down. If you’re Moscow or Pyongyang or Tehran, it’s a free-for-all. No one is minding the store. Take what you want, work in groups, work in shifts, pretend you’re law-abiding or be brazenly criminal. You’ll get the same “have a nice day” from the shopowner either way.


William Kristol follows up here with a more in depth critique of Obama's diplomacy for a world free of nuclear weapons: A World Without Nukes -- Just Like 1939