James Ussher and the Reformed Tradition, Anglicanism, and Justification… 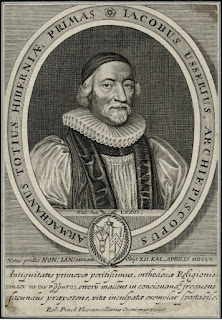 James Ussher is in some ways the forgotten man of Anglicanism, otherwise known during his time as the Church of England/Church of Ireland. Why do I say that? Well, because among much of today’s Anglicanism his influence is simply overlooked. One reason may be that Anglicanism in many of its modern variations has moved away from identifying as a Reformed Protestant Church. And Ussher was certainly Reformed and arguably the most influential Reformed Anglican theologian of the 1600s. And as such he doesn’t fit the latitudinal templates of recent times. As to his influence outside of Anglicanism, even though he didn’t attend, Ussher’s theology had a significant impact on the Westminster Assembly and thus the resulting Confession of Faith. For some Anglicans that’s just a bit too “Reformed!”

All that to introduce the following excerpt from Harrison Perkins’ book James Ussher and the Reformed Tradition (page 78). One of the big debates at the Westminster Assembly was over a question concerning the imputation of Christ’s active or positive obedience to the believer as necessary for his justification. This was just one area of doctrine where Ussher’s theology was influential. Ussher connects Christ’s active obedience (fulfillment of the Covenant of Works where Adam failed) with the justification of those who trust in Christ. Perkins writes:

The second point drawn from the eschatological dimension of a covenant is the importance of the concept of justification.186 Because Ussher argued that justification was a status that Adam could achieve in his state of innocence, justification cannot be limited to the remission of sins. Justification includes the attainment of positive righteousness. If Adam had completed his task, he would have fulfilled everything the law demanded; he would be justified. This is one factor that makes the doctrine of the imputation of Christ’s active obedience so important within the full scheme of Ussher’s doctrinal system. To attain an eternal condition of blessedness a person must be declared perfectly righteous,which remains the case even after the covenant of works was broken. The first Adam was the representative head that was supposed to fulfill the law for his posterity in the first covenant. According to Ussher, justification became a benefit of salvation in the covenant of grace because Christ was the second Adam who did fulfill the law and transfers that righteous status to all who accept it by faith.

186 The doctrine of justification and its links to the covenant of works are considered again in more extensive detail in Chapter 6.

The Irish Articles of Religion 1615, authored by James Ussher:

Article 21. Man being at the beginning created according to the image of God (which consisted especially in the wisdom of his mind and the true holiness of his free will), had the covenant of the law ingrafted in his heart, whereby God did promise unto him everlasting life upon condition that lie performed entire and perfect obedience unto his Commandments, according to that measure of strength wherewith he was endued in his creation, and threatened death unto him if he did not perform the same.

Article 35. Although this justification be free unto us, yet it cometh not so freely unto us that there is no ransom paid therefore at all. God showed his great mercy in delivering ns from our former captivity without requiring of any ransom to be paid or amends to be made on our parts; which thing by us had been impossible to be done. And whereas all the world was not able of themselves to pay any part towards their ransom, it pleased our heavenly Father of his infinite mercy, without any desert of ours, to provide for us the most precious merits of his own Son, whereby our ransom might be fully paid, the law fulfilled, and his justice fully satisfied. So that Christ is now the righteousness of all them that truly believe in him. He, for them, paid their ransom by his death. He, for them, fulfilled the law in his life; that now, in him, and by him, every true Christian man may be called a fulfiller of the law: forasmuch as that which our infirmity was not able to effect, Christ's justice hath performed. And thus the justice and mercy of God do embrace each other: the grace of God not shutting out the justice of God in the matter of our justification, but only shutting out the justice of man (that is to say, the justice of our own works) from being any cause of deserving our justification.