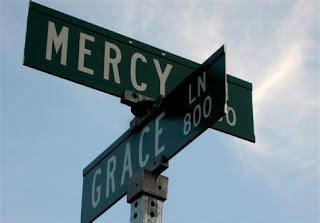 for Christian obedience. Interestingly, by implication, they are critiquing the Heidelberg Catechism as defective due to its emphasis on the motives of gratitude for Christian obedience... but that is for another musing. Often what is put forth by those looking to supplement and shore up our gratitude is 1) the motive to obey because God simply commands it, and 2) due to the necessity of holiness in our lives our motive should therefore be to pursue godly living in order to become more holy. We need to be holy. Does gratitude exclude these?
The Law commands all mankind to obedience, believer and unbeliever. Yet the unbeliever hears the law and, regarding obedience, says – "forget it." He is not the least motivated to obey God’s law merely because God commands it. Nor does the need of holiness in his life excite him to attend to the moral law as a necessary guide for his living. Rather,  “Let us eat and drink, for tomorrow we die.”

Why is it then that a believer considers God’s holy commands to be not only obligatory but now desirable? In a word, Mercy... God's mercy shown to him who was once a rebel to the Law but now pardoned in Christ Jesus.

Let's consider this “necessity for holiness”… what is meant by that? Certainly holiness is at the center of God's eternal purpose for each of the elect. Due to God’s decreed will holiness, we can say, is indeed necessary. So obedience in that context is certainly necessary as the ordained outcome for all those Christ has saved. The justified will indeed be sanctified. And having the law written on their hearts, former lawless rebels now agree with the Law even as they yet struggle against their sinful tendencies. But should the believer consider obedience “necessary” as a condition for his salvation? No. He should only consider obedience necessary in that it is the only reasonable and logical response born of gratitude in his heart to the One who bore the curse of death for his sins, i.e. the way in which God has given him to walk unto salvation (WLC32).

Thankfulness is born in the heart of the sinner for whom Christ, by His perfect obedience to the Law and bloody death on the cross, purchased eternal life.

For while we were still helpless, at the right time Christ died for the ungodly. For one will hardly die for a righteous man; though perhaps for the good man someone would dare even to die. But God demonstrates His own love toward us, in that while we were yet sinners, Christ died for us. Much more then, having now been justified by His blood, we shall be saved from the wrath of God through Him. For if while we were enemies we were reconciled to God through the death of His Son, much more, having been reconciled, we shall be saved by His life. And not only this, but we also exult in God through our Lord Jesus Christ, through whom we have now received the reconciliation. (Rom. 5:6-11 NASB)

Gratitude fuels the new-heart-attitude and rectified-will thus making it unthinkable that blood-washed sinners would respond any other way than by offering themselves unto God for righteous living. This unmerited forgiveness for our sins is not just a one time occurrence but is experienced throughout the Christian's life. We are sinners who still sin. And thankfully we have a Mediator and Advocate in heaven - Jesus Christ the Righteous - who intercedes continually for us with his precious blood... whose intercession allows for assurance of forgiveness in our consciences again and again. It would seem to me then that gratitude, as the primary motive of obedience for blood-washed sinners, includes within it all other motives for the Christian's pursuit of holiness.