In summing up the differences between justification and sanctification, Kevin DeYoung in an online essay at The Gospel Coalition writes:  "One reckons us righteous; the other makes us righteous. One allows for no increase or degrees; the other expects progress and growth. One is a declaration of God about us, the other a work of God in us."

I'm having difficulty with the description of sanctification as that which "makes us righteous."  I think, at best, it is a confusing phrase.  When Kevin writes that sanctification "expects progress and growth", I take it he is referring back to the phrase makes us righteous.  So, is sanctification a process of being made more and more righteous?  One hang-up with that construction is that it implies one can be partially righteous.  Kind of like the oxymoron of a woman being "almost pregnant."  She either is or she isn't.  I don't see how there can be such a thing as partial righteousness.  If a work is righteous then it is without any imperfection or impurity.  And in this life that will never be the case as taught in the Westminster Larger Catechism:

Q. 78. Whence ariseth the imperfection of sanctification in believers?
A. The imperfection of sanctification in believers ariseth from the remnants of sin abiding in every part of them, and the perpetual lustings of the flesh against the spirit; whereby they are often foiled with temptations, and fall into many sins, are hindered in all their spiritual services, and their best works are imperfect and defiled in the sight of God.

Now what I am not saying is that in response to the gospel believers do not exhibit good works in their lives or grow in those godly characteristics that are called "the fruit of the Spirit."  Clearly where true faith exists there will be evidence (good works) of a new heart and right-will born of the Spirit, works that are nonetheless imperfect (not righteous in and of themselves).  A new direction unto righteousness will be there, evidence of our faith in Christ.  This, of course, is the point of Martin Luther's quote, "We are saved by faith alone but not by faith that is alone."

But I don't think one should say that the good works of a believer are evidence of a growing or progressing righteousness within the believer which seems to be a logical inference from the above definition of sanctification.  Rather, aren't good works evidence of a true and lively faith, as taught in the Thirty-Nine Articles of Religion, the WCF and the WLC:

XII. Of Good Works.
ALBEIT that good works, which are the fruits of faith and follow after justification, cannot put away our sins and endure the severity of God's judgement, yet are they pleasing and acceptable to God in Christ, and do spring out necessarily of a true and lively faith, insomuch that by them a lively faith may be as evidently known as a tree discerned by the fruit.

WCF 16.2 states, "These good works, done in obedience to God's commandments, are the fruits and evidences of a true and lively faith...." The WLC speaks in a similar way, of "the good works that are the fruits" of the "faith [that] justifies a sinner in the sight of God...."

I take the above to be simply saying that good works are to a lively faith what fruit is to a tree.  And it is faith that apprehends the righteousness of Christ, "But the righteous shall live by faith."  John Calvin wrote, "In short, I affirm, that not by our own merit but by faith alone, are both our persons and works justified; and that the justification of works depends on the justification of the person, as the effect on the cause" (Acts of the Council of Trent with the Antidote).  So I don't think we can say that good works are evidence of a progressing righteousness within us.  Instead, they are evidence of  having found complete salvation by faith alone in Christ alone.  It is all His accomplishment.  But hasn't God foreordained believers to be conformed to the image of His Son?.  Yes, His work.  And aren't we exhorted "to walk worthily of the Lord unto all pleasing, bearing fruit in every good work"?... indeed, but isn't that fruit in every good work still imperfect? 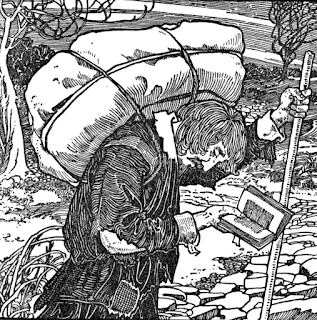 Sanctification is a "work of God in us."  Yet, by defining this work as that which makes us righteous, I find my eyes deceptively drawn away from Christ's provision of pardon and perfect obedience on my behalf to a mixed-motive heart inside of me.  Inevitably, I'm searching within for evidence of that which supposedly should be produced by sanctification.  For what I long for is true righteousness in me.  But it is not to be found there, unless of course, I entertain a weak view of sin and righteousness, which is just another way of saying it isn't there.  And where has faith gone?  It has been assigned a bystander role as I vainly work to progress along a righteousness-making path.  To the HC:

Question 62. But why cannot our good works be the whole, or part of our righteousness before God?
Answer: Because, that the righteousness, which can be approved of before the tribunal of God, must be absolutely perfect, and in all respects conformable to the divine law; and also, that our best works in this life are all imperfect and defiled with sin.
Question 63. What! do not our good works merit, which yet God will reward in this and in a future life?
Answer: This reward is not of merit, but of grace.

The acceptance of our imperfect works as righteous is not of their deservings but of God's grace.  The already but not yet formulation is applicable here.  We are already accounted righteous for Christ's sake, but in this life not yet righteous... whether partially or in whole.  "For our sake he made him to be sin who knew no sin, so that in him we might become the righteousness of God" (1 Cor. 5:21).

Beloved, now we are children of God, and it has not appeared as yet what we will be. We know that when He appears, we will be like Him, because we will see Him just as He is. And everyone who has this hope fixed on Him purifies himself, just as He is pure.
(1 John 3:2-3)

There neither is, nor ever was, in the world, nor ever shall be, the least dram of holiness, but what, flowing from Jesus Christ, is communicated by the Spirit, according to the truth and promise of the gospel. (John Owen)