Here is a pretty accurate transcription of Dr. Michael Horton giving a definition for sanctification in response to Dr. R. Scott Clark's question on Office Hours. Both men are professors at Westminster Seminary California: 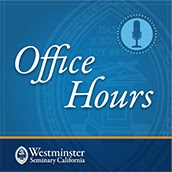 Sanctification is the process of being made holy, being cut-off or separated from that which is common - not necessarily just that which is dirty or sinful but of taking something out of the category of common or ordinary an associating it with God himself.

God, ultimately, is holy in a qualitatively different way than anything that he makes holy. He may make us holy, but we aren't holy essentially as God is holy. So God, primordially, is the one who is set apart from everything else. He is the creator. We are the creature.

Set apart, consecrated or holy use - We have been set apart by the blood of Christ. And by faith and the indwelling of the Holy Spirit, by union with Christ, we have been set apart from death and sin and the dominion of sin and death; and have been transferred into the kingdom of God and his dear Son...


Grace is not [a] something. Grace is God being favorable. It's God's favor. It's also God's gift. God no longer looks on me as an outcast, as a rebel, as a wicked sinner who must be condemned. He looks on me as his son, as a co-heir with his natural son, Jesus Christ... taken me into his family. He has justified me. He is sanctifying me. He will glorify me one day. That is his favor, due to his favor, his grace.

Dr. Horton continued, explaining that God's ordinary way of communicating his grace to his people is through ordinary means. To communicate his grace God has always used, and does today, creaturely means such as the spoken Word, human ministers of the gospel, bread and wine, the written Word. He does that rather than ordinarily working through the extraordinary, i.e. immediate and direct acts of his Spirit within individuals. This is borne out by the scriptural record. It's not that God can't work in extraordinary ways, for on occasion he does. But rather, he has shown himself as the God who has chosen to ordinarily communicate his favor to his people through common means of his creation.  This may sound foreign to many Christians today because the extraordinary view has gained such predominance in much of the church over the last 100-150 years.

Listen to Part One here!
Posted by Jack Miller at 2:04 PM