Is Rome a True Church? 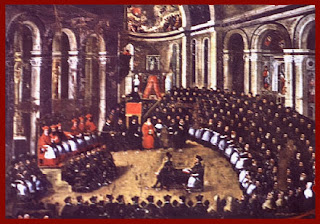 I was asked this question, via email, in the context of what Anglicans believe.  To answer that I think it is helpful to look initially at the Church of England's own doctrinal and confession statements. Otherwise, we are left to any number of positions by various Anglicans that may or may not agree with their own standards.

More precisely, the question put to me was: Is Rome part of the visible church? The Church of England's own standard's, at a minimum, make the case that the Church of Rome has erred in doctrine and practice. That is not to say that there aren't any true Christians in the RCC and not that vestiges of the gospel cannot be found there. Rather, Rome since the Council of Trent has officially established herself in opposition to the gospel and specifically the doctrine of justification by faith only and not by any works, grace assisted or not.

Rome claims justification is initially begun by baptism and kept and grown by faith and grace assisted works of righteousness thus conflating justification and sanctification. Their teaching, in a nutshell, says we are saved by the combination of Christ's finished work and our continuing works.

Article XI of the Church of England's 39 Articles of Religion reads:


XI. Of the Justification of Man. We are accounted righteous before God, only for the merit of our Lord and Saviour Jesus Christ by Faith, and not for our own works or deservings. Wherefore, that we are justified by Faith only, is a most wholesome Doctrine, and very full of comfort, as more largely is expressed in the Homily of Justification.

At Trent Rome anathematized the teaching of this article, a doctrine succinctly expressed in any number of places in the Old and New Testament such as Rom 4:5; Rom. 11:6; Eph. 2:8-9; Gal. 2:16-21. As to the question of whether Rome has erred as a church or not let's look again at the 39 Articles:


XIX. Of the Church. The visible Church of Christ is a congregation of faithful men, in which the pure Word of God is preached, and the Sacraments be duly ministered according to Christ's ordinance, in all those things that of necessity are requisite to the same.

As the Church of Jerusalem, Alexandria, and Antioch, have erred, so also the Church of Rome hath erred, not only in their living and manner of Ceremonies, but also in matters of Faith.

XXVIII. Of the Lord's Supper. The Supper of the Lord is not only a sign of the love that Christians ought to have among themselves one to another, but rather it is a Sacrament of our Redemption by Christ's death: insomuch that to such as rightly, worthily, and with faith, receive the same, the Bread which we break is a partaking of the Body of Christ; and likewise the Cup of Blessing is a partaking of the Blood of Christ.

Transubstantiation (or the change of the substance of Bread and Wine) in the Supper of the Lord, cannot be proved by Holy Writ; but is repugnant to the plain words of Scripture, overthroweth the nature of a Sacrament, and hath given occasion to many superstitions.

The Sacrament of the Lord's Supper was not by Christ's ordinance reserved, carried about, lifted up, or worshipped.

So according Anglicanism's own confession of doctrine and faith, Rome as a church has erred in matters of doctrinal faith and administration of the Lord's Supper, teaching and requiring things not in accord with the Word of God. Finally John Jewell, in the Homily for Whit-Sunday (Book Of Homilies - part of the CoE's confessional standards) teaches what the Church of England believes to be the necessary  characteristics of a true church. These three marks are consistent with the other reformed churches of Europe of that time, and agree with the Heidelberg Catechism, the Belgic Confession, and the Westminster Confession of Faith written 80 years later:


"The true church is a universal congregation or fellowship of GOD's faithful and elect people, built upon the foundation of the Apostles and Prophets, Jesus Christ himself being the head corner stone (Eph. 2:20). And it hath always three notes or marks whereby it is known. Pure and sound doctrine, the Sacraments ministered to Christ's holy institution, and the right use of Ecclesiastical discipline. This description of the Church is agreeable both to the Scriptures of God, and also to the doctrine of the ancient fathers, so that none may justly find fault therewith."

A fair conclusion based on the Church of England's own doctrinal standards would be that Rome does indeed fall short of the measure of a true visible church.
Posted by Jack Miller at 10:49 AM