Gleanings: Puritanism and the Book of Common Prayer, Part 1 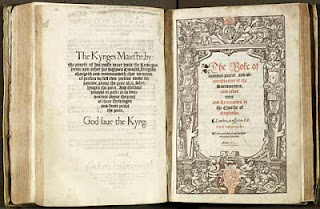 The book, The Westminster Assembly: Reading Its Theology in Historical Context by Robert Letham, is well worth the time to read.  Among other things, it's helped give me a better understanding of  the social, political, and religious influences in England that led to Puritanism and eventually the Westminster Assembly.  What's interesting to take into account are those particularly oppressive influences that affected the returning Marian exiles in the late 1550s going forward and how those influences and actions of the State/Church authority led to a Puritanism that gradually moved away from an episcopal polity toward presbyterianism and the regulative principle of worship; ultimately rejecting a state enforced liturgy as was the case with the Book of Common Prayer.  Following are some of my thoughts and gleanings from Letham's book:

Soon after Elizabeth took the throne the Protestant church was reestablished.  Yet those religious refugees recently returned from Europe found that what was taking place was far from a continuation of reforms started in Cranmer's church under Edward VI.  New legislation set in law the use of the new prayer book and other prescriptions and requirements.  In fact, "The Act of Settlement (1559) ... laid down savage penalties for departing from the prescribed liturgy."  And though they made efforts to moderate these developments, he returning Marian exiles "failed to secure any concessions to placate them" (Letham, p. 14). Initially, "draconian penalties were prescribed for any who diverged from the Prayer Book although these were rarely, if ever, enforced."  This soon changed.  "Only from around 1564 was rigid uniformity required..." (p. 15).


"When tighter control was implemented by the establishment, a nascent Presbyterian movement emerged in the 1570s and 1580s... Indeed, it was estimated by some, and reported by Mitchell, that at one point up to one-third of the clergy of England were under suspension, with attendant destitution and penury, while their congregations were as a result deprived of the ministry of the Word and sacraments." (p. 15)

These men were clergy of the Church of England and not some strain of radical Puritanism.


Indeed, as Mitchell observes, '"the points of difference between the Puritans and those who fail to be distinguished from them in the Reformed Church of England seem at first to be few in number, and of minor importance" (p. 16) ... the only expression at variance with the principle of Puritanism in the Articles of the Church was the first clause of the XXth Article, asserting the power of the Church to decree rites and ceremonies.  This clause was not present in the corresponding article as framed in the time of Edward, VI; and the Puritans strenuously contended it had been foisted in, somewhat inconsiderately, in the time of Queen Elizabeth (p.17).


The chief point at issue for the Puritans was whether the church has the right to bind consciences with anything other than the declarations of the Bible.  Mithchell puts the matter well when he says that the Puritans "claimed to restrict the authority of the church within narrower limits than their opponents, and to reclaim for liberty a larger province than they [their opponents] were disposed to allow her."  For the Pritans, worship and church polity--as well as matters of salvation--were to be drawn from the teaching of Scripture, wither expressed or implicit (p. 18).

Despite this contentious issue the doctrines of the church were solidly as what can be described as Calvinism.  This reformed theology held sway in the church through the years up until the time of Charles I and Bishop Laud.


Spinks, in his evaluation of Perkins and Hooker, finds that both "stand firmly within a broad-based Reformed theology."  Hooker "never departs from a Reformed position."  Both Hooker and Perkins are legitimate interpreters of the Thirty-Nine Articles, while "Hooker finds his theology expressed n the 1559 Book of Common Prayer; Perkins gave no hint that his theology was contradicted by it" (p. 53).

Yet under Bishop Laud, Reformed doctrines and preaching were being rooted out while older medieval church practices returned.


It was a sea change in the theological balance of power, effected within three hears of Charles's accession... This change was clearly against the doctrine of the Church of England as expounded expounded by the Thirty-Nine Articles, as presented in Cranmer's Book of Common Prayer(p. 21)... [Archbishop] Laud required absolute submission to the king, extending to acceptance of every detail of church ritual.  He introduced genuflecting, called the communion table an altar, and banned all publications that called the pope the Antichrist (p.23).

From a 21st century American point of view it's difficult to grasp the brutal and oppressive nature of the authoritative hand of the State in the church's worship.  Politics and religion were inexorably intertwined.
"Not only were the political and the religious so inextricably intertwined that 'secular' was a meaningless category, but the religious issues alone had the strength to generate the passion needed for armed uprising against the king" (p. 26).  The changes brought on by Laud contradicted the clear teaching of the Book of Common Prayer as in the case of the drastic restrictions on the preaching of sermons.


This antipathy to preaching did emerge before the Civil War, under the direction of Laud, and was pursued with vigor in some dioceses...  Yet such policies were contrary to the form for "The ordering of Priests" in the Elizabethan Book of Common Prayer: (p. 51).

The following are excerpts from the 1662 Book of Common Prayer for the ordination of priests.  The Bishop's words to the prospective priest:


Will you then give your faithful diligence always so to minister the Doctrine and Sacraments, and the Discipline of Christ, as the Lord hath commanded, and as this Church hath received the same, according to the Commandments of God; so that you may teach the people committed to your Cure and Charge with all diligence to keep and observe the same?

... And be thou a faithful Dispenser of the Word of God, and of his holy Sacraments...

... TAKE thou Authority to preach the Word of God...

The Book of Common Prayer became, in a way, the leading edge of a legislative sword used by the English episcopal authority against those who, at one time, had been in the mainstream of the church. I think it and the oppressive Church/State authority were of the same cloth in the minds of Puritans suffering under Laud's regime and thus they wanted to throw them both off. They wanted a church reformed solely according the God's Word and not one imposed by Parliament. One result of this history is a common misunderstanding held today that the Presbyterians/Puritans of that era were therefore against any set liturgies whatsoever. This was not the case at all.