Is the doctrine of forensic justification an innovation of the Reformation?  Something that was formulated by Martin Luther as a result of his struggles with sin and an overly active guilty conscience?  A lot of digital ink has been used up at various blogs over the last several months on this question.  Those of Roman Catholic persuasion believe that Reformed Christians are overly forensic in their interpretation of this doctrine and thus are not being consistent with Jesus' teaching in the Gospels, not to mention that of the entire New Testament.  I'm not going to rehash the arguments here.  Rather, I want to offer up some relevant thoughts from John Fesko's book Justification - Understanding the Classic Reformed Doctrine. 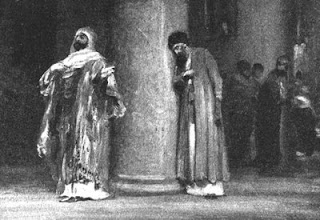 Dr. Fesko shows that Scripture teaches justification is indeed forensic and a concept not foreign to Jesus.  Even though the doctrine is not fully explained in the Gospels, this shouldn't cause one to dismiss the apostle Paul's more extensive teaching. One can prematurely draw a wrong conclusion by requiring a fully developed doctrine from the mouth of Christ.  As J. Gresham Machen wrote in The Origin of Paul's Religion, Jesus for Paul was primarily not a Revealer, but a Savior.  So then, what one finds in chapter eight of the book is a section having to do with the law-court aspect of justification in which Dr. Fesko highlights Jesus' parable of the Pharisee and the tax collector to show Christ's own use of the term.  Fesko writes that justification


is about the verdict that God passes upon the person who stands in his presence, the verdict of guilty or innocent.  This theme of standing before the tribunal of God is found in the OT:  "Keep far from a false charge, and do not kill the innocent and righteous, for I will not acquit the wicked" (Ex. 23:7; Deut. 25:1; Prov. 17:15).  God will not acquit the wicked, which is why Paul explains that Abraham receives his righteous status by faith alone.  Moreover, God imputes the obedience, or righteousness, of Christ to Abraham.  This interpretation is also confirmed by Christ's use of the term "justification."

Christ explains in the parable of the Pharisee and the tax collector the nature of justification and how it relates to righteousness:

He also told this parable to some who trusted in themselves that they were righteous, and treated others with contempt: “Two men went up into the temple to pray, one a Pharisee and the other a tax collector. The Pharisee, standing by himself, prayed thus: ‘God, I thank you that I am not like other men, extortioners, unjust, adulterers, or even like this tax collector. I fast twice a week; I give tithes of all that I get.’ But the tax collector, standing far off, would not even lift up his eyes to heaven, but beat his breast, saying, ‘God, be merciful to me, a sinner!’ I tell you, this man went down to his house justified, rather than the other. (Luke 18:9-14)

Notice that Christ uses the parable against those who trusted in themselves, who thought they were righteous or innocent before God and loyal to the Torah.  In this parable Christ describes the Pharisee... in terms of the general commands of Torah: thievery, injustice, adultery, fasting, and tithing.  It is in these term of Torah observance that some of the Jews thought they were righteous.

Fitzmyer observes that this parable shows that Christ - recognized that righteousness in God's sight was not to be achieved by boasting or even by self-confident activity (either the avoidance of evil or the striving for good in the observance of Mosaic and Pharisaic regulations).  This saying about justification is important for it may reveal that the NT teaching about the matter is somehow rooted in Jesus' own attitude and teaching: One achieves uprightness before God not by one's own activity but by a contrite recognition of one's own sinfulness before him.  Hence, "the Pauline doctrine of justification has its roots in the teaching of Jesus."

For these reasons Paul makes statements like "a person is not justified by works of the law but through faith in Jesus Christ: (Gal. 2:16), to counter the idea that a person is righteous by being obedient to the Torah.  By contrast, the tax collector who sought the mercy of God and the forgiveness of sins was justified before the tribunal of God... (pp. 237-240)