Rome vs. Reformed, a debate re: justification...

The current debate between Rome and Reformed that I've been blogging about, of course, isn't a new thing.  And, that bit of news isn't new.  With that in mind, it can be helpful, though, and educational, to go back to earlier chapters in that argument in order to get a clearer picture of the issues that separate these two church traditions.  And looking back to the 16th century, at the center of the Reformation debate there was no greater dispute than the one over the doctrine of justification by faith alone, a subject that continues to roil the waters today.  Martin Luther called it the article upon which the Church stands and falls.  So what did Luther mean by "faith alone?"  One could look to him as well as others for that answer.  It was not only Luther, but other reformers:  Calvin, Cranmer, Ursinus, Bullinger, to name a few, who adopted the same basic phrase and exact same doctrine.

By 1563 the doctrine "justification by faith alone"  had been roundly rejected as heresy by Rome in the Council of Trent, its official response to the Protestant reforms.  Yet several years earlier a forerunner of this split (for the book click here) took place in an exchange of letters between Roman Catholic Cardinal Jacopo Sadoleto and reformer John Calvin.  Sadoleto wrote to the Genevan Christians in order to convince them to return to Rome.  The Genevans called on John Calvin, then in Strasbourg, to respond.  Both letters dealt with many doctrinal areas.  This debate is a good starting point for anyone considering the claims of Rome visa-vis the confessional doctrines of the Reformed tradition.  As a teaser, read the following excerpt of Sadoleto's and Calvin's correspondence concerning the path of justification.  Take note of the difference of how faith is defined by both men, how righteousness is obtained, and where the ultimate ground of a sinner's salvation lies:  Rome' paradigm of faith in Christ plus the grace-fortified works done by the sinner - contrasted with that of the Reformers - faith alone resting in Christ and His finished work alone, by God's grace alone. 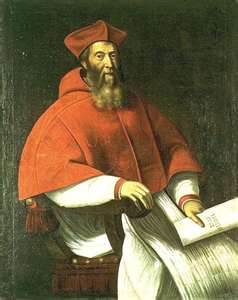 If then, Christ was sent that we, by well-doing, may through Him, be accepted of God, and that we may be built up in Him unto good works; surely the faith which we have in God through Jesus Christ not only enjoins and commands us to confide in Christ but to confide, working or resolved to work well in Him.  For faith is a term of full and ample signification, and not only includes in it credulity and confidence, but also the hope and desire of obeying God, together with love, the head and mistress of all the virtues, as has been most clearly manifested to us in Christ, in which love the Holy spirit properly and peculiarly resides, or rather Himself is love, since God is love.  Wherefore, as without the Holy Spirit, so also without love, nought of ours is pleasing and acceptable to God.  When we say, the, that we can be saved by faith alone in God and Jesus Christ, we hold that in this very faith love is essentially comprehended as the chief and primary cause of our salvation...

... And if, at any time, overcome by frailty and inconstancy, we lapse into sin (would that this happened to us rarely at least, and not too often), we, however, rise again in the same faith of the Church; and by whatever expiations, penances, and satisfactions, she tells us that our sin is washed away, and we (always by the grace and mercy of God) restored to our former integrity, these methods of expiation and satisfaction we have recourse to and employ - trusting, when we do so, to find a place of mercy and pardon with God.


You, in the first place, touch upon justification by faith, the first and keenest subject of controversy between us.  Is this a knotty and useless question?  Wherever the knowledge of it is taken away, the glory of Christ is extinguished, religion is abolished, the Church destroyed, and the hope of salvation utterly overthrown... you very maliciously stir up prejudice against us, alleging that by attributing everything to faith, we leave no room for works.

... I will briefly explain to you how we speak on this subject. 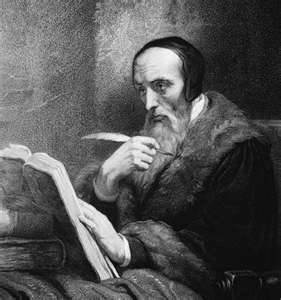 First, we bid a man begin by examining himself, and this not in a superficial and perfunctory manner, but to cite his conscience before the tribunal of God, and when sufficiently convinced of his iniquity, to reflect on the strictness of the sentence pronounced upon all sinners.  Thus confounded and amazed at his misery, he is prostrated and humbled before God; and, casting away all self-confidence, groans as if given up to final perdition.  Then we show that the only haven of safety is in the mercy of God, as manifested in Christ, in whom every part of our salvation is complete.  As all mankind are, in the sight of God, lost sinners, we hold that Christ is their only righteousness, since, by His obedience, He has wiped off our transgressions; by His sacrifice, appeased the divine anger; by His blood, washed away our sins; by His cross, borne our cure; and by His death, make satisfaction for us.  We maintain that in this way man is reconciled in Christ to God the Father, by no merit of his own, by no value of works, but by gratuitous mercy.  When we embrace Christ by faith, and come, as it were, into communion with Him, this we term, after the manner of Scripture, the righteousness of faith.

... But what notion, you ask, does the very term righteousness suggest to us if respect is not paid to good works?  I answer, if you would attend to the true meaning of the term justifying in Scripture,you would have no difficulty.  For it does not refer to a man's own righteousness, but to the mercy of God, which contrary to the sinner's deserts, accepts of a righteousness for him, and that by not imputing his unrighteousness.  Our righteousness, I say, is that which is described by Paul (2 Cor. 5:19) that God hath reconciled us to Himself in Jesus Christ.  The mode is afterwards subjoined - by not imputing sin.  He demonstrates that it is by faith only we become partakers of that blessing, when he says that the ministry of reconciliation is contained in the gospel.  But faith, you say, is a general term, and has a larger signification.  I answer that Paul, whenever he attributes to it the power of justifying, at the same time restricts it to a gratuitous promise of the divine favor, and keeps it far removed from all respect to works.  Hence his familiar inference - if by faith, then not by works.  On the other hand - if by works, then not by faith.

... We deny that good works have any share in justification, but we claim full authority for them in the lives of the righteous.  For if he who has obtained justification possesses Christ, and at the same time, Christ never is where His Spirit is not, it is obvious that gratuitous righteousness is necessarily connected with regeneration.  Therefore, if you would duly understand how inseparable faith and works are, look to Christ, who, as the Apostle teaches (1 Cor. 1:30) has been given to us for justification and for sanctification.  Wherever, therefore, that righteousness of faith, which we maintain to be gratuitous, is, there too Christ is, and where Christ is, there too is the Spirit of holiness, who regenerates the soul to newness of life.