The Gospel According to Olevian...

Question: Could you give a more definitive explanation of what the gospel is?

Answer: The gospel, or the good news that delights the heart of the poor condemned sinner, is a revelation of the fatherly and immutable will of God, in which He promised us, who are unworthy, that all our sins have 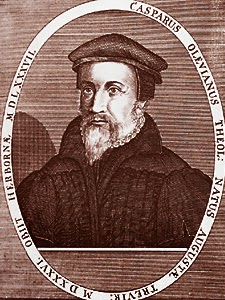 been washed away and pardoned not just for the rest of our lives but, indeed, forever. He carries out this promise by giving His Son to die for us and by raising Him.

Since Christ died not in His own sin but in ours (as if He Himself had committed it) and arose out of this same sin as a mighty victor (1 Corinthians 15:17), it follows that there is not a single sin of ours for which He has not paid.


16 For if the dead are not raised, not even Christ has been raised;17 and if Christ has not been raised, your faith is worthless; you are still in your sins. 1 Corinthians 15:16, 17

If even one of all those sins that Christ took upon Himself had not been paid for, He would have had to remain in the tomb and could not have risen. For where there is even one sin, there is also eternal death, as God Himself says in Deuteronomy 27:14 ff.


14 The Levites shall then answer and say to all the men of Israel with a loud voice,

15 ‘Cursed is the man who makes an idol or a molten image, an abomination to the Lord, the work of the hands of the craftsman, and sets it up in secret.’ And all the people shall answer and say, ‘Amen.’ Deuteronomy 27:14, 15

Also, “The wages of sin is death” (Romans 6:23). Since, therefore, Christ arises out of all our sin as a victor in our flesh (which He assumed and forever retains), this is public testimony to us that we are considered as pure and righteous in the eyes of God as Christ Jesus was when He arose from the grave (Romans 4:23-25; 1 Corinthians 15:17).

23 Now not for his sake only was it written that it was credited to him, 24 but for our sake also, to whom it will be credited, as those who believe in Him who raised Jesus our Lord from the dead,25 He who was delivered over because of our transgressions, and was raised because of our justification. Romans 4:23-25

Along with that, God through Christ both promises us in the gospel and then actually gives us the Holy Spirit. The Spirit turns our hearts from sin and from the kingdom of the Devil to Himself, bears witness that we are children of God, initiates in us both joy in God and eternal life here below, and brings it to completion in us up in heaven. All of this God freely offers and gives to us in the gospel, without any regard to our past, present, or future merit or piety. He applies it to us by grace through faith, so that whoever boasts, boasts in the Lord (Jeremiah 9:24; 1 Corinthians 1:31).

23 Thus says the Lord, “Let not a wise man boast of his wisdom, and let not the mighty man boast of his might, let not a rich man boast of his riches; 24 but let him who boasts boast of this, that he understands and knows Me, that I am the Lord who exercises loving-kindness, justice and righteousness on earth; for I delight in these things,” declares the Lord. Jeremiah 9:23, 24

30 But by His doing you are in Christ Jesus, who became to us wisdom from God, and righteousness and sanctification, and redemption, 31 so that, just as it is written, “Let him who boasts, boast in the Lord.” 1 Corinthians 1:30, 31

It can also be described more briefly: the gospel is a revelation of the fatherly and immutable will of God, in which He promises all believers

1. that their sins have been pardoned from eternity and shall be forever forgotten, and

2. that He will freely give them the Holy Spirit and eternal life, without any past, present, or future merit of ours, because of the voluntary sacrifice of this most excellent person, Christ — truly God and truly human. This sacrifice was there before the face of God from eternity, then was promised, and now has been carried out and completed, retaining forever its efficacy for our full redemption (Ephesians 1:3-14)


3 Blessed be the God and Father of our Lord Jesus Christ, who has blessed us with every spiritual blessing in the heavenly places in Christ,
4 just as He chose us in Him before the foundation of the world, that we would be holy and blameless before Him. In love
5 He predestined us to adoption as sons through Jesus Christ to Himself, according to the kind intention of His will,
6 to the praise of the glory of His grace, which He freely bestowed on us in the Beloved.
7 In Him we have redemption through His blood, the forgiveness of our trespasses, according to the riches of His grace
8 which He lavished on us. In all wisdom and insight
9 He made known to us the mystery of His will, according to His kind intention which He purposed in Him
10 with a view to an administration suitable to the fullness of the times,that is, the summing up of all things in Christ, things in the heavens and things on the earth. In Him
11 also we have obtained an inheritance, having been predestined according to His purpose who works all things after the counsel of His will,
12 to the end that we who were the first to hope in Christ would be to the praise of His glory.
13 In Him, you also, after listening to the message of truth, the gospel of your salvation—having also believed, you were sealed in Him with the Holy Spirit of promise,
14 who is given as a pledge of our inheritance, with a view to the redemption of God’s own possession, to the praise of His glory.

HT: Faith of Our Fathers
Posted by Jack Miller at 3:33 PM

Email ThisBlogThis!Share to TwitterShare to FacebookShare to Pinterest
Labels: gospel